In real life I…
Am a systems analyst for a Bank in Boston. I have only been working there for a few weeks but schwam already empowered me to quit whenever I want. I also enjoy cooking, eating, hanging with my dog, and reading.

Favorite pump up Jam: hmmm I’m terrible at names of song. Dessert by Dawin holds a special place in my heart

What’s your 2017 motto? Train like your idols until they become your rivals
-also, sharing is caring… 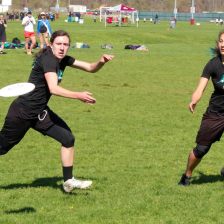 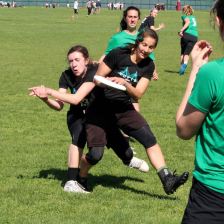 How’d you get your nickname: It’s because my sneeze sounds like a spaceship taking off… yeah not what you’d think.

Tell an embarrassing story
-We took a US geography quiz during 2017 college Nationals. I could only name 14 1/2 states. The 1/2 was because I put Colorado and Utah in all 4 of those square states in the middle.
-I was on the bowling team in high school and I once had a final score of 14.

Best award ever received:
Most improved bowler!!! for above bowling team

What Harry Potter House do you think you belong in?
Ravenclaw

More fun fact(s):
-I did gymnastics from age 2-15 and my floor routine was to the song “Sassy Brassy.” I will still perform it today for groups or special events if you apply a minimal amount of peer pressure.
-I have finger-toes (my toes are so long they look like fingers) and I have giant feet for my height (shoe size 10)

Social media intro: Our next rookie bio features a player who got an early start to her ultimate career at Paideia and then swiftly continued her reign at Tufts Ewo. She’s a triple threat – a vegetarian, a celiac, and a lefty but we still love her anyway. What she lacks in her knowledge of US geography or ability to metabolize gluten, she makes up for with her ridiculous grabs and bids. Meet #42 Rachel Kramer or better known as NASA and it’s not because she’s good at making space or laying out. Find out the real story behind her nickname and also maybe #fingertoes by clicking on her bio! #sassybrassy #bowlingchamp #jasiansquad