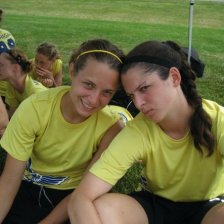 As we dive into the official start of the season our Social Squad sat down with the Brutesquad captains (all Michigan alums) and Coach Ari for an exclusive tell-all.