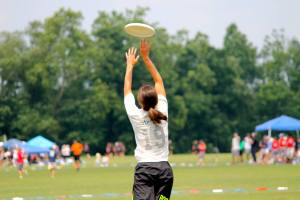 The tournament featured one day of pool play and one day of bracket play. We played and won against Schwa (13-4) Ozone (13-5) and Hot Metal (13-1) in Saturday’s pool play arounds. In each game, we came out strong and applied pressure early. We were able to capitalize on the other teams’ turns and our own blocks, rarely giving back the disc once we gained possession of it.
Sunday featured three bracket games against Heist, Molly Brown, and Scandal.
Versus Madison’s Heist, we began the game by trading offensive points back and forth. Heist didn’t give many unforced errors in the first half and we worked hard putting pressure on them to get turns. We took half 7-5, and went on to win the game 13-7. Highlights of this game included a huge, 80+ yard backhand huck from Leila in the back of our own endzone all the way to Becky running deep for the score.
Our semifinals matchup was against Denver’s Molly Brown. We came out strong in this game, starting with a few breaks before trading a few offensive points and taking half 7-3. In the second half, Molly Brown scored a few to make it 9-5, but we pushed on and won the game 13-5. Courtney came up big in this game, with a great deep D play followed by a score on the other end, and great overall D by Schwam.

Our finals matchup was with DC’s Scandal, our second matchup with the country’s defending champs in two weekends. You can watch a replay of the game here on NextGen. Although this game started out by trading O points, we soon pulled away on a break with a big huck from Kami to Jacobi to make the score 4-2. From there, our D-line scored several breaks to make it 6-2 (which included a hilarious score from Chelsea Murphy to Chelsey Witte), and our O-line took half 7-3 on a smooth huck from Dory to Leila. Scandal continued to fight, bringing them within 2 at 10-8, but we scored several points to win 13-9.
Thanks to everyone for following along with us on Twitter and on the live stream! Our next tournament will be over Labor Day Weekend, for the Pro Flight Championships. Until then, we’ve got six weeks of practice to continue to improve and get better as a team.