We are gearing up for the U.S. Open Tournament in MN – rocking our new jerseys and feeling fierce. The tournament is a 4-day round-robin style tournament that will give us a shot at our top U.S. competition and a chance to play a few international teams. We are seeded 6th out of 8 – excited for some awesome competition!

Thursday
Thursday at 9 a.m. we begin with a game against Iceni, a London-based team who has won England’s national championship and the European championships for the last three years running. At 11:15 a.m., we play San Francisco’s Fury, 2013 runner-up and 9-time national champions. We close out play on Thursday taking on Seattle Riot at 1:30 p.m. We’ve played close games with all three of these teams.

Friday
On Friday, we begin the day with a match against Texas Showdown at 9 a.m. At 11:15 a.m. we play Bamboo, the top women’s club team in Colombia. We close out play on Friday with a matchup against Vancouver’s Traffic, the

Sunday
The women’s finals will take place at 1:30 p.m. on Sunday. Here’s hoping for an appearance! 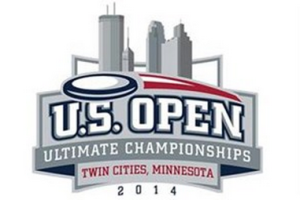 You can find our tournament schedule and live results here.

We’ll be tweeting game updates @100percentBS– and you can also follow the tournament @usopenultimate.

We’re really looking forward to taking on the top teams in the U.S. this weekend. Thanks to all our family and friends for your support!